A History of York in 100 Pictures 10: St Andrewgate

I walk along St Andrewgate almost every time I go into town, and I always think about how often it was mentioned in the wardmote court records.  It was a poor parish in the late 16th century, and in 1585 was united with the neighbouring parish of St Saviour’s.  Even before then, the church may have fallen into disuse.  The Monk ward jury complained in October 1576 that Sir John Richardson, parson of St Saviour’s church, was keeping pigs in St Andrew’s churchyard.  In later periods the church has been used as a stable and a school, and is now an evangelical church. 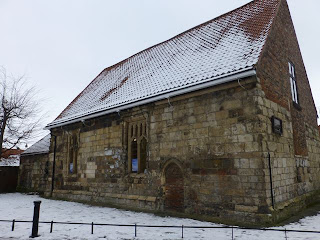 St Andrewgate seems to have been less built up than other, more central, streets in the 16th century.  The records refer to tenements there, but also to stables and a number of gardens, which may have stood separate from a house.   In 1575 Mr Edmonds was ordered to pave in front of his garden in St Andrewgate, and to cleanse and scour it and get rid of the dirt, while the jury were equally firm with Mr Moorhouse in 1581, telling him to ‘avoyd the filth and donge before his gardinge in St Androgaite’.*