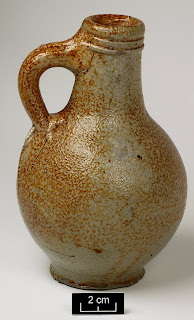 Lately the news seems to have been full of exciting archaeological excavations, most notably the discovery of Richard III’s remains under a Leicester car park (as you might imagine, I’m in favour of him being reinterred in York, but that’s a whole other issue …) Fascinating as such discoveries are, many excavations that never hit the headlines illuminate our understanding of everyday life in equally interesting ways.

A dead king is all very well, but for me a ceramic bottle that has been carefully buried under a doorway is just as intriguing, and tells us so much that it interesting about beliefs at the time. Filled with bent pins, nails, human hair, pieces of wood or bone or urine, these bottles were intended to ward off witches and other evil-doers and to prevent their magic working on the occupants of the house.  They were particularly common in the 16th and 17th centuries, when hysteria about witches was at its height.

There is a fine example of a complete witch-bottle on display in the Merchant Adventurers’ Hall in York.  The witch-bottle in these photographs was excavated by the York Archaeological Trust, and you can see the pins still inside.

I was fascinated when I first heard about witch-bottles, and was determined to include one in Time’s Echo.  Here’s an extract towards the end of the book, when Hawise visits her sister, Agnes:

IT is All Hallows Eve, and the sky is so dark with the storm that it might be night.  The wind tugs at my cap and my gown is sodden.  The shop keepers have put up their shutters and retreated inside. The whole street seems to be sulking.  Doors are left ajar to let in the meagre light, and candles flicker in the dim interiors.

Agnes’s door is open too.  A tallow candle burns on the chest and in the guttering shadows, I don’t see her at first.  Then I realise that she is crouched over some kind of jar.

She gasps and the jar slips from her hands as she leaps to her feet.  I hear the crack as it hits the stone floor where Charity is too lazy to lay rushes.

‘Hawise!  What are you doing here?’  Her voice is tight with shock.

‘I didn’t mean to give you a fright.’

I stoop to help pick up the pieces and the sour smell of piss hits me.  ‘What on earth did you have in here?’  I sniff at a piece.  It is unmistakable.  I raise my brows.  ‘Agnes?’

‘It is nothing to do with you!’  She snatches the pottery from me, but my eye is caught by the metal glinting in the dull candlelight.

‘Pins.’  I pick one up between forefinger and thumb.  Suddenly I know what she has been doing.  ‘You’re making a witch’s bottle.’

Agnes sucks in her breath.  ‘What if I am?  It is All Hallows Eve.  We do what we must to keep the evil forces away.’

‘And you think burying a bottle under your door will keep a witch away?’  I laugh.   ‘That is just silly superstition, Agnes!  And who are you trying to keep away?  Your husband has had all the so-called witches hung!’  My amusement fades bitterly as I remember Sybil hanging from the gibbet, tongue bulging and tiny feet twitching.

‘Not all,’ says Agnes and she looks at me.