Today the market in York is a thriving collection of stalls tucked away between the Shambles and Parliament street.  In the 16th century, the main food market was known as Thursday Market, and it was held in what is now St  Sampson’s Square.

Although some citizens had gardens and garths where they could grow some vegetables, the market was a vital part of the city.  Country people had to pay a toll to be able to sell chickens, eggs, butter, cheese as well as fruit and vegetables inside the city, and trade was carefully regulated.  Trading offences – buying up goods in advance, short-changing customers, inflating prices and so on – were swiftly punished with a spell in the pillory that stood in the market.

The pillory in the market was used for the punishment of other ‘public’ crimes such as vagrancy, immorality or slander.  In 1577, John Gibson had his ears nailed to the pillory on market day for slandering the Queen, and the infamous John Harper, who makes an appearance in Time’s Echo, was also forced to stand in Thursday Market for two hours, between 11.00 and 1.00, for ‘certayne evill contemptuose and unreverrent words of the Queenes majestie’.* 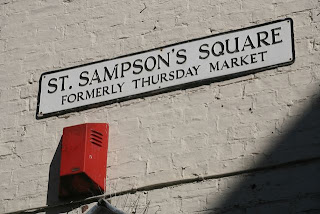 Also in the market was a cross, a well, and a toll booth.  So important was Thursday Market to the business of the city that it was the responsibility of the Corporation to keep it well paved, although there are frequent complaints in the Wardmote Court Book about the Chamberlains failing to maintain it.

On market days – Tuesdays, Thursdays and Saturdays –  trade opened with the striking of a bell, and people poured in from outside the city to buy and sell and do business and find out what was happening in the city and the country.  So Thursday Market was the obvious place for Hawise to meet Francis Bewley for the first time. 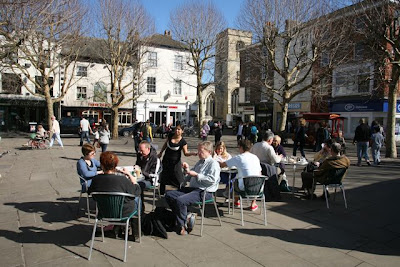 In the extract below, Grace walks into St Sampson’s Square on her first morning in York, and finds herself back in Thursday Market.

I looked around, puzzled.  I saw a hot dog stall, a cycle rack jammed with bikes.  It was still cool, but people were enjoying coffee at the tables and chairs set out in the spring sunshine.  The shop on the corner was selling televisions, their brightly coloured pictures flickering at the edge of my vision.

I frowned.  Where was the market cross?  Where was the tollbooth?  Where were the stalls and the peddlers and the goodwives tutting over the vegetables and the countrywomen squatting by their baskets of eggs and butter?  Thursday Market should be packed with traders and beggars and servants and all the folk who come to gossip and to bargain and to buy.

‘Hawise!’  The hand on my arm makes me jump and I swing round, my hand at the ruff of my linen smock.

‘I’ve been calling your name for an age,’ Alice complains.  She is plump and pretty – and knows it, Elizabeth would have said – and beneath her cap she has very blue, slightly protuberant eyes, with long, fair lashes that she flutters against her milk-and-roses complexion.  ‘Didn’t you hear me?’

‘No, I –’  I glance back at the market, but everything is as it should be.  I can’t remember why I thought it wasn’t, and I shiver suddenly.

A goose walking over my grave.

It is Alice who mentions Francis to Hawise for the first time:

We are pushing our way through the crowded market, dodging the puddles as best we may.  The chamberlains still haven’t mended the paving, in spite of the pains laid on them in the wardmote court, and there are deep ruts where the countrymen’s carts have stuck, while the cobbles are covered in mud and vegetable scraps and fish scales and sodden straw and dung.

The stall holders are shouting enticements over the sounds of the peddlers crying their trinkets and the clucking of chickens in their wicker cages.  Beggars skulk on the edges of the market, plucking at gowns and calling for charity. A boy weaves past us, balancing a tray on top of his head, and the smell that drifts from it makes me sniff appreciatively.  ‘Hot pies!  Hot pies!’ he cries but you can hardly hear him in the hubbub of conversation.  It is always like this on market days.

There is so much noise that no one is going to overhear us, but I lower my voice anyway. ‘What is it like?’ I ask Alice, because I want to know and there is no one else I can ask.  Elizabeth would have told me, if she had known.  ‘You know … doing it?’

‘It’s all right,’  she says carelessly.  ‘Hurts a bit at first, but it gets better.’  Her lips curve as she thinks about it.  ‘A lot better.  And it keeps John happy.’

I would like to ask more, but don’t want Alice to know how ignorant I am.  ‘And when will you be wed?’ I ask instead.

‘Soon.  My family have given their consent, so now it’s just a dowry to be agreed.  It is time you had a sweetheart too, Hawise,’ Alice says, her smile sharp as pins.  ‘You must be, what, twenty?’

‘I am nineteen,’ I say stiffly, turning my basket out of the way of a wheezing goodwife.

‘I hear that you have an admirer,’ she says with a sly look.

She arches her brows at me.  ‘Don’t tell me that you haven’t noticed?’

Infuriatingly, she stops then to admire some ribbons on a peddler’s tray.   I know she is just doing it to tease and I am tempted to ignore her, but I am intrigued, I admit it.

‘Mistress Rogers has new lodgers.  They say Mr Phillips is a notary from London.  He has business with my Lord President no less.’

I gape at her.  My Lord Mayor and his brethren are pleased to think they rule this city, but we all know that they have to do whatever the Council of the North tells them.  The Lord President is here in place of the Queen herself, and there is no one in York who dare say him nay.

A notary who has dealings with the Council of the North, let alone my Lord President …!

‘And he has noticed me?’

‘Not Mr Phillips!’  Alice rolls her eyes.  ‘His assistant!’

‘But I don’t know any assistant.’

‘Well, it seems he knows you.  He asked Anthony Pusker who you were after church.  I can’t believe you didn’t see him, Hawise.  It’s not as if there are that many new faces in the congregation!’

‘Anthony told him you were in service with the Beckwiths.  I’m surprised he hasn’t found an excuse to meet you.  He is a clean and sober man by all accounts, and he will be a notary.’  She purses her lips, totting up his prospective worth in her head.  ‘You could do worse.’