Time’s Echo is published at last on 30th August 2012, and I am marking this momentous occasion by, er, being away on holiday. 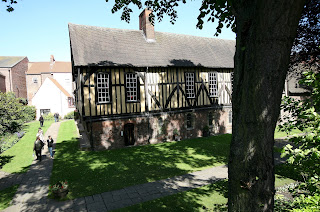 I am pretending that the launch date is instead on 11th September, when I will be having  a party in the Merchant Adventurers’ Hall here in York.

In the meantime, I thought I would mark the publication date with a sneak preview of an extract from Time’s Echo.  Hawise Aske lives in late 16th-century York but she is restless and curious about the world beyond the city walls.  Here she is talking to her friend and fellow servant, Elizabeth about the places she would like to see but which she will never have a chance of visiting.

Comment below and tell me a place you would love to visit and I’ll pick one winner to receive a free signed copy of Time’s Echo when I come home at the beginning of  September.

Read an extract below:

I don’t want to think about the future. I want to stay in this moment, with my friend beside me and the sun in my eyes and the smell of rosemary on my fingers and my ribs aching with laughter.

Hap is still panting.  ‘I shouldn’t have made you run so far,’ I say to him.  ‘It must be hard with only three legs.’  He rolls over so that he is lying against my leg, and when I rub his chest in apology, he closes his eyes with a little sigh of pleasure.

I smile at the sight of him.  Hap is not a handsome creature, even I can see that, but his expression is alert and he is clever, much cleverer than Mistress Beckwith’s pretty spaniel or our master’s blundering hounds. I hardly notice the withered paw he holds tucked into him any more.

My hand resting on Hap’s warm body, I lie back and look up at the sky.  It is blue and bright and the air is soft with summer. In the thorn tree behind us I can hear two blackbirds chittering at each other.

Above us, a flock of pigeons are swooping through the air.  They turn as one, their wings flashing in the sunlight.  I watch them enviously.

‘Don’t you wish you could fly?’

‘I do.  Imagine what it would be like, to be up in the sky looking down on everyone!’

A billowy cloud drifts past.  It blocks out the sun for a moment, and for some reason the shadow passing over my face makes me shiver.  But then it is gone and the sudden chill with it.

‘I’d be terrified,’ Elizabeth says without opening her eyes.

‘I think it would be wonderful.’  My fingers are still absently caressing Hap’s sleek coat, and he huffs out a sigh and wriggles into a more comfortable position against me.  ‘You could see everything that’s going on, but there would be no one to see you, or tell you to walk slowly or speak quietly or fetch more wine or … or do anything.’

‘And nowhere warm to sleep and nothing to eat but worms.’ Elizabeth is nothing if not practical. ‘You’d hate it.’

I have never been further than the white stone cross on Heworth Moor.  Mr Beckwith went to London once, but even though I teased him to tell us all about it, he just said it was a godless place.  I suspect they made fun of his northern ways.

‘You’d like to see London, wouldn’t you, Elizabeth?’ I poke her and she bats my hand away.

I pluck discontentedly at the grass.  ‘I don’t know .. more something.’

‘Hawise, you want too much.’  She sits up properly, serious now.  ‘Why can’t you want what everyone else wants?’

‘You don’t. You don’t think like everyone else. You want to fly like a bird and see the Queen and go on a ship and travel to Cathay …’  Elizabeth rolls her eyes at the impossibility of my dreams.  ‘You know what our mistress says.  You must be careful.’

There is no use wishing that I could fly or stand by the ocean or see where peppers grow.  My life is here, in York, and little comfort it will be unless I have a husband.  I know that. I want to be like everyone else, I do, but it isn’t that easy to stop thinking thoughts.  But I need to.  I need to have a care for my reputation, just as Mistress Beckwith says, just as Elizabeth says.

Tell me a place you would like to see but which seems as remote to you as London does to Hawise and I’ll put you in a lucky dip to win a free copy of Time’s Echo.  Don’t forget to check back after 3rd September to see if you’ve won, as I’ll need you to send me an address.